A forensic view of fraud

This year, Charity Fraud Awareness Week takes place from 18 to 22 October. The purpose of the week is to raise awareness of and tackle the increasing prevalence of fraud in the charity sector. Unfortunately, there are several aspects of the structure of charities and their operational activities that put them at high risk of being targeted by fraud. Such factors include:

It is not just charities that are affected by fraud. There is no area of society that escapes being vulnerable to fraud, more so now than ever before. Sadly, coverage of fraud in the news tends to take a back seat to violent crime, so you could be forgiven for not realising that you are more likely to be a victim of fraud than of any other crime. The Crime Survey for England and Wales has recorded that in the year ended December 2020, there were 4.5m reported instances of fraud, more than any other type of crime. The true scale of the fraud problem is likely to be much larger: the National Crime Agency estimates that fewer than 20% of economic crimes are ever reported to the police. 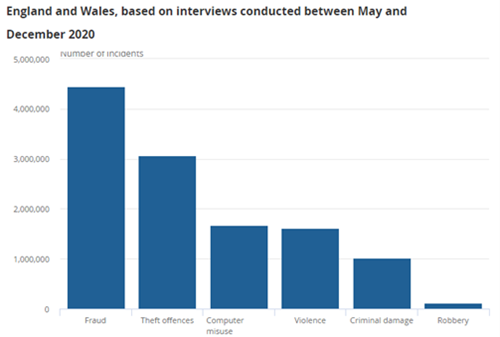 Various types of fraud have been increasing for several years, but in the past twelve months, fraudsters have been given opportunities on an unprecedented scale as a result of COVID-19. Even the UK government’s responses have been targeted by fraudsters, for example:

Illustrated in the below graphic, is a framework commonly used to understand why individuals commit fraud, and is particularly relevant when thinking about fraud in a post COVID-19 world. 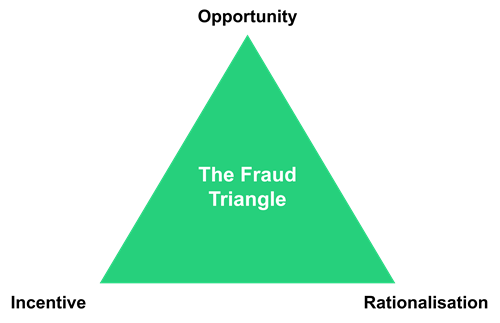 By thinking about fraud in the context of the fraud triangle, it possible to learn valuable lessons. It is clear that where an opportunity presents itself, fraudsters will dedicate significant resources to exploit it. A significant portion of fraudulent claims could have been avoided with more rigorous background checks on applicants. Though there will always be incentive to commit fraud, the spike of instances in the last twelve months indicates that when businesses and individuals face hardship, some will turn to fraud.

Private individuals and businesses have been at greater risk of fraud during the pandemic. A 68% increase from 2019 to 2020 in remote banking fraud is partly attributable to the increased usage of online retail and banking facilities. “Impersonation scams”, where criminals impersonate reputable organisations to con members of the public, are also reported to have risen by 94% in the past year.

So, who can you turn to if you have been the victim of a fraud? In the UK, victims of fraud are encouraged to report the crime to the police via Action Fraud, the UK’s national fraud reporting agency. However, most frauds reported to Action Fraud are not investigated; they are merely recorded.

Cases are only likely to be investigated where there are multiple victims, or where there are links to organised crime or terrorist groups. Many victims feel let down by the response after reporting. Even if a case is prioritised, it is questionable whether the police have the resources and technical skills necessary.

How a forensic accountant can help

An alternative for victims is to instruct a forensic accountant. At Azets our forensic department regularly takes on fraud investigation work of all sizes, both for individuals and companies. Typically, we adapt a four-stage approach:

Prevention: A proactive strategy intended to help an organisation prevent fraud. We recommend considering in advance the areas of risk, and implementing policies to mitigate risk. Systems and procedures should be routinely tested to expose weaknesses. Although a preventative strategy may be more expensive initially, in the long term it is less costly than being reactive.

Detection: A detection strategy assists in stopping a fraud before it grows or even before it starts. We recommend educating staff on how to spot potential fraud risks/warning signs and what to do if they identify them. Common red flags include duplicate payments and the change of supplier bank account details. We can help devise whistleblowing procedures and train staff on the practicalities of how to effectively report a fraud.

Investigation: investigative strategies are reactive, and can become costly; not only has an organisation suffered a loss, management time will be taken up dealing with the consequences. The costs of appointing specialists must also be considered. At Azets we ensure that any investigation is the most cost-effective strategy.

Remediation: It is important to prevent fraud that has occurred from escalating, and to stop it occurring again. We review our clients' systems and controls to identify weaknesses, and recommend bespoke solutions to reduce the risk of a future instance of fraud.

As part of our four-stage approach we can offer the following services:

If you have been a victim of fraud and would like to explore your options, please feel free to contact our team at hello@azets.co.uk for a no-fee initial consultation.